Not regularly. Not ever. I swear. But something happened. I tug at my seatbelt, testing its give, or lack thereof. Something maybe broke inside of me? I glance past myself in the side mirror at the nothingness and everythingness of it all. I don’t know and I don’t know what is going to happen to my family now. My parents, my sister, friends… Have you ever seen those shows or heard those stories about missing people? And you think, that’s not going to be me. That’s not going to happen to me. Maybe it could happen to someone I know, but not me.

But here’s the crazy thing.

This is my doing. Kind of. It’s not like I meant to, but the air on my skin, even at this speed, is warm. So I had to. Either that or–God, it’s like I’m high but I’m not, I swear. My arm floats out the open window, the wind curls itself around my bones. I suppose I had a choice. I suppose we all do, not that this type of thing comes up often. Or ever for most people, but… a nearly inaudible squeal escapes my lips. He glances over at me, still wearing his sunglasses even though the sun is behind us now. Sinking into the past like my old life. These things only happen to people who seek them. People like me. Like us. Him and I.

Just I. He’s part of the outsideness of this, like a constant. I am the variable. It didn’t have to be me, I’m not deluded enough to believe that. My eyes trace his bare hands; one thumb hooked on the bottom of the steering wheel, the other hand buried in his thick hair. His gaze set somewhere into the future darkness, into a sky moving past bruised into full dark. Stars have started to make a name for themselves through the residual light of what was. I know it could have been anyone. He didn’t choose me for any special purpose. Not for my youth or my bones. None of that.

Because the truth of the matter is

he didn’t really choose, did he? And the constantness of him isn’t what he believes it to be. It’s not what anyone on the outside would believe it to be. I walk my fingers down my legs landing on my knees. My eyes find their way to the key hole on the glove compartment. That’s the key to all this though, keeping the reality of things from becoming clear. I wouldn’t say it’s survival, not when survival isn’t the goal. I would just chalk it up to–I steal a glance at him, one last time–what is the best word for it?

My family is sure going to miss me, all of my friends too. At least I like to think that, that thought is almost as exhilarating as knowing what I know. As being one step ahead like I am. My fingernails tap the boney part of my kneecap. He notices and smiles. I don’t look but I can feel it which is why this is going to be so wonderful. He really has no idea. Neither do you I guess.

My arm juts out, smashing the gloves box. Before he can react it springs open and the gun slips out. He should have known better, but it’s too late now. The car is spiralling, skidding, whipping across the road, I let the spent gun, slip from my hand and allow time to take me. My eyes find the horizon one last time as we sail off the cliff. 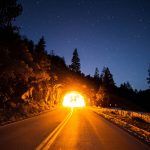