Brody Creek – PART TWENTY-ONE | This is where things change.

We sat on the edge of my bed staring at the wall.

Our breath heavy. Neither of us acknowledging each other. My head felt like a balloon filled with toxic chemicals, simultaneously bloated and dizzy. “It looked…” Deacon started to say, his voice shockingly clear. “I know.” I finished for him. I felt the warmth of his hand next to mine, and the wild urge to kiss him came over me.

What does it mean? Which one was which? Where is his old man? If that was him, then what the fuck is this thing we call death? I thought without parting my lips to ask any of these questions but couldn’t. “He’s here. I can feel it.” Deacon said. “It sounds dumb, but it’s true.” He’s looking at me now. I keep my eyes dead ahead. The warmth of his hand feels like a radiator and I want to pull away, but I don’t move.

“Alb… Alb! Albany!” His voice was suddenly icy and frantic. I blinked, the edges of my world were blurring like ink bleeding from a canvas. My brain exploded with poetic notions, I felt like a different person. My mind fetl like it wasn’t mine. Dissociation, was the word. The word, the feeling of the word bloated inside my skull. It ached.

His hand was squeezing mine, so tight I could feel the fine bones and tendons filing together and overlapping. I tried to pull it away, but he wouldn’t let go. “Come back to me.” His hands were on my cheeks now. He was kneeling in front of me. I glanced down at my hand expecting to see a third hand squeezing it, but nothing was there. But, the problem was my hand was twisted and warped as if something was gripping it.

Laughter so stark and repulsive it made my guts liquify. It was coming from the doorway. Deacon leapt onto me, and my first thought was that I wanted to cry. Not out of fear but exhaustion. I was too tired to fight, it had been too long, and I wasn’t entirely sure my mind wasn’t my own. That’s when Deacon flipped around, blocking my weak body behind his. His arms thrust back, locking me into a protected cage behind him.

Without fear. I burrowed my face in his back. My heart was beating so slowly it were as if my blood had been replaced with honey, the thought made me sleepy. That’s when I heard him say it, “It all makes sense now. I get it.” At first I thought he was rambling, but then I heard that laugh again, and recognized it. “I’m not letting you win this time, Pa.” 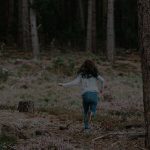