I never looked back.

I don’t know exactly what he saw but I knew in that moment of blind terror, running away from that Thing, that nothing would ever be the same again.

Our feet didn’t feel like they were actually touching the ground, I heard thumping but I was certain it wasn’t coming from us. I just prayed to whatever God might be listening that, that sound was coming from my heart and not from It.

We didn’t stop running until we hit main street, and even then I kept stride with Deakin right into his old man’s Garage.

“Pwaah!” A sound, I assume was meant to resemble ‘Pa’ or possibly even ‘Pops’, came out like a battle cry.

His old man slid out from beneath a car and slowly turned his head to look at us. He didn’t speak, everyone in the shop was still. I suddenly felt extremely out of place and took a step backwards. Deakin stood staring, slack-jawed, as if something took away all his fury and replaced it with numbness. His old man sat and tapped his wrench on the cement floor. His eyes moved from Deakin’s face to mine. I felt my mouth open and snap closed again; how could I explain what happened? I wasn’t entirely sure what Deakin saw.

He cleared his throat, and shifted his gaze to the enormous man holding some greasy tool, people in town called Murph–I never knew if that was his first or last name. “Murph,” he said and stood, “get the shotguns.”

Murph lumbered out of the room and somehow lowered the temperature with every footfall. Deakin’s old man walked over to his son, and took his wagging jaw in his hand.

He? It wasn’t a he. I wanted to say it out loud but refrained, because suddenly I didn’t know. Had it been a He? Or was Deakin’s old man just confused? Or did Deakin see someone and I just imagined the other Thing?

Deakin’s throat clicked, “I nerr…” His old man slapped the side of his head with the meaty part of his palm. Deakin’s head jerked awkwardly. “I nerr seen an-a-thin likit.” He managed to spit out.

His old man held onto his jaw tight, the little muscles around his eyes shivered. I could feel my own heart roaring in my chest. So Deakin had seen It too.

“Egh…” He started then closed his lips and tried again. “It.” Was all he could manage to say.

It. I felt an icy finger run down my spine and I jumped. Deakin’s old man glanced at me, his eyes locked on mine and I looked away. “You seen ‘im to?” He asked. I kept my eyes glued to the pockmarked cement floor and nodded.

I heard him clear his throat and watched him take a step back. “Oh, but Sweetheart, that’s where you’re wrong.” He said.

Deakin’s old man craned his head back and without missing a beat, responded. “Not a chance.” 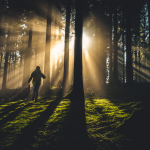 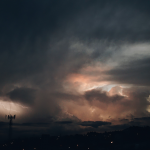