They didn’t tell us we had to stay behind.

I suppose they figured we wouldn’t want to follow. That’s where they were wrong. There was something about It that made you simultaneously want to run from, and to, it at the same time. Like It was something you could never un-see, but somehow it was also something you couldn’t stop staring at. I had developed this craving, a metallic taste that spread over my tongue for a millisecond and once it was gone, I needed to taste it again. I needed to place my finger on what that taste was like I had a gun to my head. I needed to see It again. I had to know what shape it was; it’s features (if you could call them that) kept floating around inside my mind like a mobile over a baby’s crib.

I saw it’s eyes leaking into it’s claws–did it have claws?–it’s mouth, full of precisely triangular teeth. No, were they triangular? Yes, they were triangles, but they were upside down, like if it bit down on anything it would stab itself–a shiver ran through me–and it would like it. That’s how it designed itself. To feel all the pain of the souls it devoured, because… Because it liked it, it needed it. It got off on it. That’s why it smiled at me like that, like it was about to rape me, and I suppose in a way it did. It raped my pain and is now violating my mind with it’s oily memory.

Deakin howled, suddenly coming to as if he were a human statue that had just been granted life. Murph and his old man had just crossed the threshold between the seeming safety of the garage and the outside world. Deakin’s old man paused, he didn’t look back, but his shoulders drooped as if he were tasked to do something that was going to break his heart. Like breaking an animals neck to put it out of it’s misery. Murph looked up to the sky, I followed his gaze; the once limitless blue had revolted in swirls angry of bruise-colored clouds. It could have been described as beautiful if it wasn’t so heinous.

Deakin’s old man beat the butt of his gun against the ground.

Murph’s head snapped back down. He glanced over his shoulder at me, something in his gaze felt like a warning; don’t look at it. The sky or It? I heard my throat click before I realized I had swallowed. Deakin hurled his body towards the two men but stopped short of stepping outside. Retching sounds tumbled out of him as his hands flailed halfway between purpose and spasm. His old man began to walk.

They ignored him and continued toward the back alley. They knew Deakin wouldn’t follow, and he didn’t, instead he crumpled onto the concrete and writhed in and out of the fetal position. He wasn’t the same kid who used to string other kids up by their ginch anymore, and he probably never would be again. In that moment, I knew that, but I didn’t care. In that moment only two things mattered to me; what the fuck was It, and why did Deakin’s old man already know? 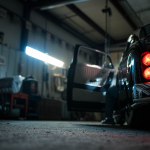