See, I don’t remember how we got outside.

One minute we were inside staring out, the next we were following him into the woods. The part that never sat right with me wasn’t that little flicker of missing time. It was the air. How the air didn’t seem to change. It was still stale and woody, like the inside of my house.

I coulda sworn I could still hear the fireplace.

But that couldn’t have been right, could it have? Why would we have had the fireplace on in July? Unless to burn something. For the life of me I can’t remember, but I don’t think that was a case of forgetfulness. It was something else entirely. Sort of like how in dreams things seem to just skip.

Deacon was holding onto my sleeve like a little boy.

He was mumbling the same thing over and over. I assumed it was about his old man not really being there, but he never once stopped. He never once said we should turn around. He never once pulled on my sleeve and screamed in my face and told me to fucking run in the opposite direction.

No, he–we–just kept pace with his Old Man.

Or whatever this thing was that we were following deeper and deeper into the woods. He started to hum a song, a song that reminded me of my own old man–even though I hadn’t seen him since he took off when I was seven. In that moment, I looked at the back of his head, and it was my old man’s head.

Black hair slicked back to cover the thinning spots.

Like a vampire. I tripped over a rock, and almost fell to my knees. Deacon slowed beside me. I blinked and the man with my Pa’s hair and Deacon’s old man’s face fizzled and shifted into a horrible shape. Only for a second, but it was long enough to know.

“Deac–” but before I could finish saying his name, another voice shot out of the dark from behind us. A low, firm, urgent whisper “RUN. NOW.” I grabbed Deacon’s wrist and booked it in the opposite direction. Deacon didn’t resist. He sprinted back with me, and that voice, those two words kept ringing through my head.

We leapt over a log. I could hear something distinctly not human chasing us, it’s breath–if you could call it that–hot on our necks. Neither of us said anything, we just kept running faster.

We were on the edge of the woods, I could see the soft light from my house through the thinning trees. We were almost out when I realized whose voice it had been. Then I saw him standing in the trees, his face full of pride and confidence. He nodded at me as we rushed out of the woods, and this time it really was him, Deacon’s Old Man saved us. 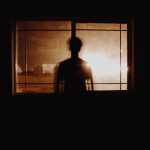 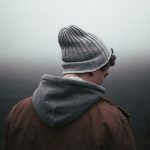