I Never Talked To Him About It.

I was too–what’s the word? Blindsided? Shocked? Bewildered?–scared out of my fucking mind, pardon my french. He walked away, alone. I assumed he went right back to his shop, gave Deakin a kick in the ribs and kept working like nothing was wrong. Like he hadn’t left with two shot guns and his best employee and just come back alone.

Deakin stopped talking to me after that.

Not that we had a history of ever actually talking prior to that day. So, I never found out what happened to Murph. I bet Deakin never did either. For weeks after that day I looked for Murph, I purposely sought him out, but no one had seen him–and the weirder part–no one seemed to care. I wanted so bad to ask Deakin’s old man what happened, what really happened. How did those kids suddenly just come back to life? And what happened to Murph? I crept around that alley his shop backed onto for months, until his neighbor called the cops on me. I had no good excuse, so they dragged me home and I got grounded for a month.

I tried asking other people what they thought happened to Murph.

But the more people I asked the more people told me they had no idea who that was. As time went by, I seemed to be the only one who even remembered that he was once a living, breathing human being. By the following summer, Murph was a figment of my imagination. I did try asking Deakin once, but he just looked at me like I had cockroaches crawling out of my nose and threw a pop can in my face. A full one.

I decided to convince myself I had made the whole thing up.

That I probably got some drug-laced candy–which, for the record, is not out of the realm of possibility here–and imagined the whole entire thing. Either that, or the fall from the tree screwed with my head, which is an incredibly rational and likely possibility. So, I dug a mental hole and buried those too-real memories as deep as they could go. I shoved the part about Murph being someone I remembered from before that day down the furthest. I buried all of it in an unmarked grave inside my head. It was all I could do to not lose my mind and spend my entire childhood in a mental hospital. Or worse.

But here’s the problem with graves…

Sooner or later someone–or someThing–is going to dig it up. Either that or the un-dead Thing buried under all those lies is going to find its way out. When that Thing is thirsty enough, hungry enough, angry enough, it’s going to come out and it’s going to want revenge. And that is exactly what happened, and I can’t say I am surprised, but what happened next, what I saw, what we all saw, the fucking scale of it… No one, no one could have been prepared for that. 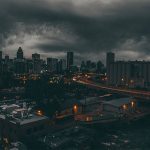